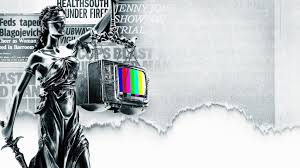 Whenever a sensational criminal case comes to be tried before the court, there is an expected upsurge in the public curiosity. Using the thirst for sensational news, Media, including TV Channels, Newspapers, News Websites etc. start publishing their own version of the facts. They call it investigative journalism, which is not prohibited in India. The impact of television and newspaper coverage on an individual’s reputation by creating a widespread perception of guilt or innocence even before a court of law has announced its verdict, is called “Media Trial” or “Trial by media”.

The Freedom of Expression has been enshrined in Article 19(1) of the constitution. This article is one of the important facilitators for widespread media engagement in democracy. On the other hand, Article 19(2) empowers the state to put reasonable restrictions on the freedom given by Article 19(1).

Right to Life and Liberty / Right to Privacy / RTI

The media trial has been alleged to violate the Fundamental Right secured by Article 21 (right to life and liberty) of an individual. Right to Privacy has been recognized as a right “implicit in the right to life and liberty guaranteed to the citizens of this country by Article 21. However, the law of the land has made some exceptions to the rule of privacy in the interest of the public, especially, subsequent to the enactment of the Right to Information Act, 2005 (RTI).

During media trials, not only the suspects and accused but also the victims suffer from excessive publicity and invasion of their privacy rights. When the media unilaterally conducts a sting operation, it violates the privacy of another person and makes it liable for legal action. The right to privacy of an individual should be protected unless there is an identifiable large public interest.

Right to reputation implies that any allegation casting an adverse reflection on the character of an individual should not be published, unless it comes under certain circumstances. If it is not under those circumstances, the media entity will be guilty of defamation. This also emanates from article 21 of the constitution.

Laws of contempt of court

The paramount considerations for the law of contempt of court include the dignity of the court and fairness of the trial. This implies that once a case has reached court, no one is allowed to publish his own version of the facts. A violation of this rule, which has evolved judicially, would amount to contempt of court. It is backed by various statutes and prohibits the publication/broadcast of certain matters under the court trial. One example is that the name of a rape victim cannot be published without permission of the court.

Former Chief Justice of India R M Lodha described the issue as “very serious” and said the court would consider some guidelines to be put in place for balancing the rights and interests of all the stakeholders.

The Supreme Court is now expected to consider framing guidelines for media over covering criminal cases and briefing by investigating agencies.